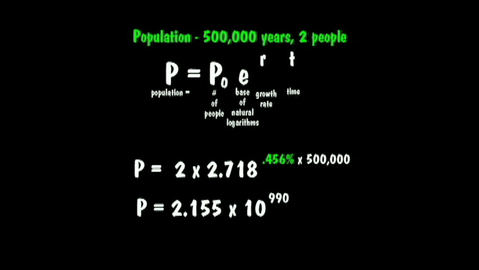 
Below are some calculations using math that dispel evolution or any long age theory of man having been around for great lengths of time.


A study by mathematician, John Heffner, shows different scenarios on population studies.  He has calculated the human population growth rate based upon about 400 years of recorded population history.
In one instance, he chooses 500,000 years ago as a starting point where the first man and woman appeared on earth.  Using his formula for calculating what the present population should be today - 2 people, 500,000 years - there would be the number 2.45 time 10 to the 990th!
Keep in mind that this number is MUCH bigger than the number of electrons that could fit in the known universe which is approx. 10 with 130 zeros after it.
The bones of all the people there would be could not fit on this earth at that rate, and a conservative rate at that.
But if you take the 8 people that survived Noah's flood and use the same calculations, you arrive at what our present population is today (at the time of this lecture) of 6 1/2 billion people.
Here is a link to a paper written by John Heffner showing different scenarios of population figuring:
John heffner paper

And ... here is a link to a Youtube video where John Heffner explains these very population calculations of his on a television show:
john heffner tv

*You might be interested in checking out my kids'/family-friendly video, "I want to Explore" Part 1, which incorporates John Heffner's figures as a
musical segment within the video.