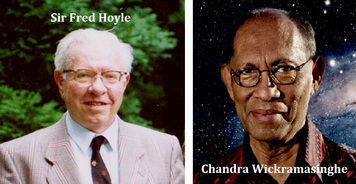 Intro - The late, Professor Sir Fred Hoyle, astronomer, astrophysicist, atheist/agnostic background, well-known world wide ... was a Professor at Cambridge, England.  He is the one who coined the term, "the Big Bang" in talking with some colleague who was describing a theory.  He didn't believe in it tho because of the "degradation of information," i.e. "What explosion have you ever seen create order?" ... and other reasons.  He was also the founder of "the steady-state theory" which I understand he also set aside.
The late Professor Hoyle acknowledged his disbelief in "the Big Bang." Click below and watch a short video of Sir Fred Hoyle concerning the Big Bang theory:
sir fred hoyle

Sir Fred Hoyle and his colleague, Chandra Wickramasinghe (Buddhist background), both evolutionists, used the Laws of Mathematical Probability to calculate the chance of life arising from non-life basically.
The results ... one chance in the number 10 with 40,000 zeros after it.  On August 14, 1981 in the London Express newspaper, these headlines could be read:

They then began writing books explaining their mathematical position much to the annoyance of their fellow scientists.  Neither of them to my knowledge became Bible believers.


*If you are interested to know more, I do have a segment of one of my videos devoted to their story and some of their quotes since their math observances, "CREATION ... beyond the shadow of a doubt" Part 2.  The video also has a segment on other quotes by professors/scientists that have used math to show the impossibility of evolution.